After a criminally long dry spell, the federal government has finally returned to passenger Rail as something worth paying attention to; not to mention supporting with our money. This support should be the proverbial no-brainer, given both public desire and the huge number of proven benefits afforded by Rail transportation; but then we’re the country that keeps fighting transportation and energy battles already being won just about everyplace else in the “civilized” world (this syndrome is worth a lot of ink, but someone else can spill that).

The decades since World War II have seen a steady downward slide for passenger Rail in America. There are plenty of reasons for this; our love for the supposed freedom of the automobile, suburban sprawl, the destruction of many of our Rail lines and of course the Interstate Highway System (built and maintained, by the way, through federal subsidy).

A good overland transportation system has been described as a Three-Legged Stool, with Road, Rail and Air being the legs. In America, the Rail leg has been carved up almost to destruction, and the increasingly alarming results of this butchery are finally becoming obvious to politicians, planners and regular people all across the political spectrum. But wait!

Passenger Rail Is Coming Back!

Cities all over the West (except for Albuquerque) can’t build Light Rail and Streetcar systems fast enough to satisfy public demand. Regional and commuter rail lines are being planned and built where no passenger Rail has existed for 50-60 years. Admittedly, the present state of the economy and its effect on municipal revenue streams is pinching these efforts, but they’re still creeping forward, and will pick up again (along with fuel and asphalt prices).

This Rail renaissance is nationwide. Amtrak ridership has been increasing year by year at a rate that would delight the heart of any red-blooded business—-except, weirdly enough, Amtrak. The management of Amtrak seems to be having trouble with the Vision Thing — with making that long-overdue adjustment from bare survival to robust growth. Hard to blame them; if you’ve had your neck in a choking collar for long enough, it can be disorienting as hell when that collar is suddenly loosened.

What vision and planning does exist at this level is concentrated on new rolling stock for Amtrak and on several High Speed Rail (HSR) coridors scattered around the country. These are wonderful things, and we’d like to see them all in place tomorrow morning; after all, we are visionaries. But we think some official rail visionaries are getting ahead of themselves.

You Want Commonsense Conservatism? Here It Is: 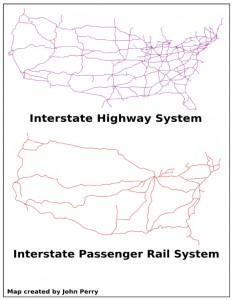 If you look closely at a map of the Interstate Highway System, then at one of Amtrak, you won’t help but notice that the latter seems about half-built. This is because it is. Many important city-pairs and city-groups — El Paso / Albuquerque / Denver, for example — are not directly connected at all. Want to go to Denver by train? Welcome to Chicago. How about El Paso? Hello LA.

The first priority for our passenger Rail network should be — a network. Our country sorely lacks what some call a “Steel Interstate” or what our group calls a “Rail Interstate”. Our rails need to go everywhere our highways go, and our trains should not be spending half their trip time pulled over waiting for freights to rumble by. Another no-brainer. Or should I say, Duuuhh!

As to Amtrak’s aging rolling stock; we submit that more time running at speed and less time starting / stopping / idling would do wonders for that old equipment; not to mention the well-being of the passengers, the crew and the environment (works for traffic, works for trains).

In case we should develop an inferiority complex over our lack of widespread high-speed Rail service such as that enjoyed by Europe and Japan, not to worry; it’s not a complex at all! Our inferiority in this respect is quite real.

The passenger Rail picture in our country is finally getting a little brighter, but let’s put first things first. A bunch of boring old railroad track and gravel ballast doesn’t project the glamour of snazzy new rail cars and locomotives, but that’s where we have to start.

If we can ever re-establish a true national Rail network; one that actually goes most places at a predictable if modest 70-90 mph, and leave it unmolested for a while, we believe that We The People will love it, use it, and will almost certainly cough up the relatively modest sums needed to safely speed it up from there.