Rocky Mountain Flyer: Filling In The Blanks Out West

After the attacks of September 11, 2001, our entire commercial air fleet was grounded for several days, leaving us almost entirely auto-dependent for our transportation needs, and adding to the war-trauma of the attacks themselves. During subsequent hearings, a passenger rail advocate told Congress that a good national transportation system should be like a “three-legged stool”, with Road, Rail and Air being the legs. He stated, and we agree, that in America, one of the legs is missing, although perhaps it’s more of a stump. To further abuse the analogy, make that a series of stumps.

We Americans abandoned Rail as our primary passenger-carrying mode of transportation less than 70 years ago, and we’re in serious trouble as a result.

Rail is safe. Rail is remarkably efficient in land, fuel, materials and maintenance. Rail is environmentally friendly. Rail promotes renewable energy and reinvestment in our city centers and first-ring suburbs.  Rail is a natural partner to walking and biking. And people just plain like trains. And with high retail fuel prices (they’ll be back up soon enough) coupled with our considerable air-travel headaches, people will be liking them all the more. Look at Amtrak’s startling ridership increases over the last few years, increases all the more remarkable given Amtrak’s skimpy and historically under-fed status.

So how do we resurrect and nurture passenger rail in America?  So how did we nail its coffin shut to begin with? Simple. We built an interstate highway system connecting all major, and most “minor”, American destinations. Although this system requires continual high-priced maintenance and is starting to come apart, it facilitated our present automotive dominance, and is sometimes still pretty fun and convenient. Our “rail-roads” need the same kind of medicine we give our highways.

Connecting The Dots (and DOT’s?)

If you compare a map of the Interstate highway system with one of Amtrak, our supposed rail equivalent (see left map below), you’ll notice that if the former were anything like the latter, we’d be missing, among other routes, all of I-25 and much of I-35. There is almost no North-South service between the Mississippi drainage and the West Coast.These gaps need filling, and they need it bad. 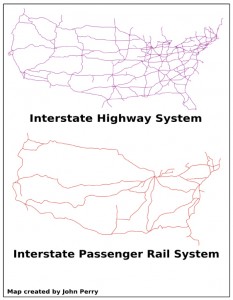 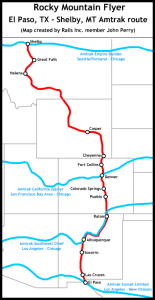 For twelve years, Rails Inc has called for North-South passenger rail serving the Rocky Mountain and Great Plains regions. Several years ago, we proposed what we call the Rocky Mountain Flyer (RMF); an Amtrak Superliner or equivalent rail service running from El Paso to (probably) Shelby, Montana, via Albuquerque, Denver, Cheyenne and points in between (see right map above).  Besides conferring the many benefits of modern rail service on this region, including those listed above, the RMF would connect Amtrak’s four principal East-West routes west of the Mississippi, plus the cities and highways along its route.

Much discussion exists about Amtrak’s aging rolling stock. While this problem is serious, we think the shortage of practical routes to run it on is much more so. We need a rail network at least as developed as that of our highways.

Obstacles are ,of course, considerable; ranging from torn-up and built-over  tracks to heavy (and necessary) freight traffic. New track must be built. Advanced signaling, train control and turnouts must be installed. An almost unheard of level of cooperation must occur among the federal government, governors, legislators, DOT’s, advocates and the freight railroads, coupled with an exciting and thorough public information campaign.

We must also abandon our destructive and nearsighted antipathy to all federal and state investment in our infrastructure—also known as Taxation. This blind aversion is not “Conservative”—-it’s insane.  But that’s another article.

Since we dreamed up the RMF, we’ve become aware of other worthy efforts to serve our rail Empty Quarters; efforts like the Western High Speed Rail Alliance, the “Steel Interstate” and the movement to extend the Heartland Flyer to Kansas City. The fact that these trains exist only as fantasies illustrates just how grossly incomplete our rail “Interstate” is.

As to rail priorities, we think that a conprehensive rail network that actually goes most places, even one of modest speed capability (70-90 mph), should take precedence over a series of High Speed Rail segments scattered around the country. We further think that this “Rail Interstate” must be publicly owned like our Concrete Interstate. Having said that, we see plenty of room, on this public utility, for multiple carriers both public and private. Public right of way, public and private rolling stock: doesn’t sound all that radical to us.  Sounds like our highways and airports.

We at Rails Inc would love to see all kinds of rail everywhere; super-fast rail “liners”, traditional Mag-Lev, Urban Mag Lev, the whole shot. But we think that a full-fledged national rail network, at least as fast and convenient as the Interstates on a good day, will attract the levels of public participation and excitement required to restore rail to its former prominence. And a well-conceived non-partisan education campaign will convince us, the general public, just what a breathtaking bargain Rail transportation is.